We are traveling in the Sistan Baluchistan region in southeastern Iran, the largest and one of the poorest in the country, along the borders with Afghanistan and Pakistan to end up on the Gulf of Oman.

It was once the land of brigands who attacked and robbed the caravans of traders, but also of nomadic tribes who came from Central Asia to raid the villages of settled populations who engaged in agriculture. A land battered by climatic events, where long periods of drought alternate with periods of terrible floods, strong winds that carry the desert sands for several months a year and make any activity almost impossible. It is still a little known area and Iranians from other regions avoid it because they consider it dangerous. There are no interesting cities, if not a few small characteristic villages, there are no monuments, if not some fascinating ruins, and it is difficult to find information about the area.

Even Anita, our Iranian friend, had never been there, and that's why we decided to go together. We wanted to go on a trip without appointments, and just get carried away by events. Leaning on local drivers who knew the area and mostly knew where it was best not to go, we started from the small village of Gale Now located in the north of the region a few kilometers from the border with Afghanistan.

Traveling along seemingly endless roads, we reach the village of Bahu Kalat, about a hundred kilometers from the Gulf of Oman, which here they call Little Sea, and near the mountains that border Pakistan. It is one of the largest in the area, but at first glance it seems almost abandoned. Today it is a small and dusty village in a desolate area, where only 200 families live there, a thousand people. Many have moved to look for work elsewhere mainly due to the long drought that has hit the area for several years and makes it impossible to work in the fields.

Moslem, our driver who accompanies us on this part of the journey, introduces us to a very special person, Malik Dinar, the crocodile man. Malik is 66 years old, married and has nine children. He tells us, with fluent English, that since the revolution things have gotten worse and worse and that after working a couple of years as a policeman in the village district, he had to go to work abroad, as so many did. other of his fellow villagers. His family remained in the village, while he, in his early twenties, went to work in Oman as an electrician, where he was staying for six months to briefly return home and then return to work, and so on for several years. Later, this time together with his wife, he moved to Bahrain, but she returned home after three years. Malik tells us that it has been very hard to be away from home for so long, but that he is also very satisfied with the experiences he has had. Now he is a farmer and grows mango, lemon and banana trees, although most of the trees have dried up due to the low rainfall of recent years.

We ask him to tell us about the crocodiles, we had no idea what we would see.

His eyes light up, perhaps he couldn't wait for us to ask him the question, and he begins to tell us his story. About 13 years ago he began to care for the few crocodiles that remained in the area. Once there were several, but due to the drought that has gripped this part of the region for several years, the pools where this species of crocodile usually lives, have almost completely dried up, to the point that the Mugger crocodile has been inserted in the red list IUCN since 1982 as a vulnerable species. The crocodile Mugger is used to living with little water and also stays on land for a long time. The problem, however, is when he is hungry and begins to move away from the pools and goes to look for food by entering the village to feed himself with the livestock and poultry of the families who live in the area. It happens especially in summer, when temperatures can reach 50 degrees and the water evaporates very quickly. But it also happens during floods. The small pools are temporarily transformed into large lakes that flood the streets of the village and the crocodiles move freely between the houses, thus creating many problems for the inhabitants.

To overcome these problems and when there is enough water in the Sarbaz River, Malik uses his pump to take it and supply it to the pools. Unfortunately, however, the river is often dry and Malik is therefore forced to use the water destined for its fields. Every two or three days, at first he always did, he feeds about twenty crocodiles some pieces of chicken, scraps or leftovers from the evening that the village butcher supplies him.

Malik tells us that according to an Indian legend, this ancient animal descends from an aquatic monster called "Mugger", while the inhabitants of Baluchistan call it "Gando", due to its particular walk that always makes its belly crawl on the ground. In their language, "Gando" means "that which crawls on his belly".

We sat for a long time in the shade of the only tree in the large courtyard of the house, while sipping tea, listening to his very quiet voice with a sweet tone, almost as if he were a storyteller.

After a few minutes Malik comes back, and apologizes for wearing dirty clothes and broken shoes, but he explains that they are the clothes he always uses when he goes to find crocodiles because they recognize him. In his hand he has a bucket full of chicken pieces.

We follow him past the courtyard towards the river. Once it was enough to walk a few tens of meters to get to the shore, but now you have to walk for hundreds of meters in the arid and impervious land before reaching the water. We must walk behind him in single file at a certain distance, we must not make noise and above all we must be silent. We proceed with the step as smooth as possible, while Malik precedes us and begins to call the crocodiles. He does it with his very sweet voice, repeating the same word several times consecutively, “bebsi, bebsi”, which means “sleep, sleep”. In the meantime he had sat down continuing to talk, and so shortly afterwards the first crocodiles arrive who recognize him and stop around him, remaining completely still, also bewitched by his voice. They let themselves be touched, caressed, and they move, with a lightning snap, only when a piece of meat is thrown at them, which they immediately devour, and then they move again, always near Malik.

We move towards the pool where the younger specimens live, even if it apparently seems uninhabited, and as soon as Malik sits down, the first eyes appear from the water. And with the typical exuberance of young people, they go up to the shore very quickly to compete for the best place to grab the first piece of chicken. Then, they too, like adults, stop and listen.

It is a beautiful, touching scene, I would say almost primordial. It is clear that there is great respect between Malik and his crocodiles.

It is almost sunset, and it is better to go home. In her memory, he tells us, that only once did crocodiles kill a boy who dived into a pool, but this happened before he started looking after them and that hasn't happened since. But in the dark it is better to avoid staying in the area.

Before dinner we visit the large house which he completely renovated by himself. A beautiful room where everyone eats together sitting on the typical carpets, a room where he has created a small museum full of ancient tools that they used in the past, his large bedroom, another living room where you listen to music and finally, very proudly , shows us a huge refrigerator completely filled with frozen chicken meat, and tells us that he feels honored to be the keeper of this ancient animal and that in the future it will be his son Heider who will look after his crocodiles. 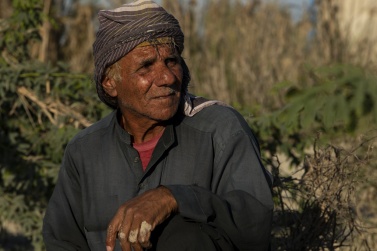 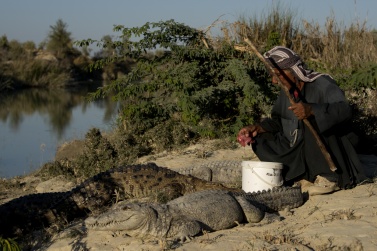 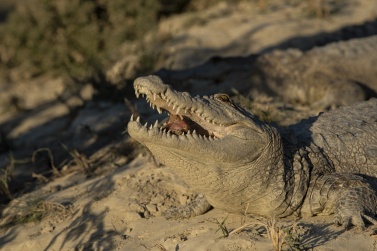 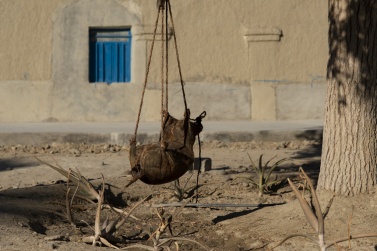 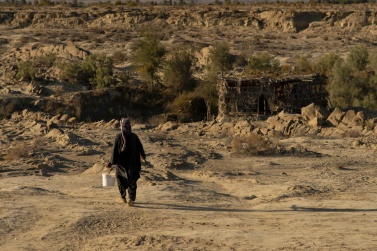 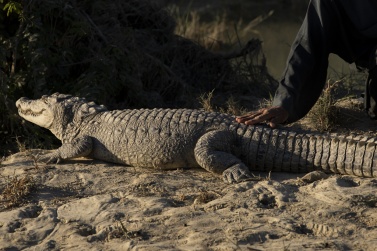 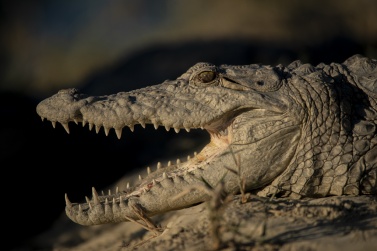 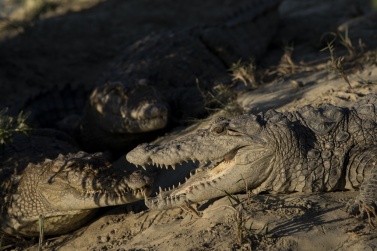 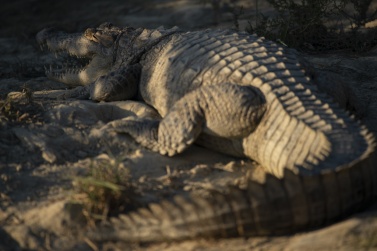 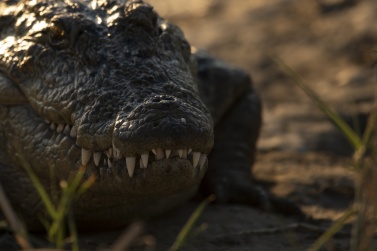 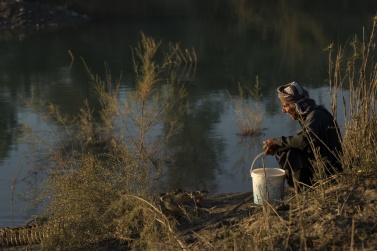 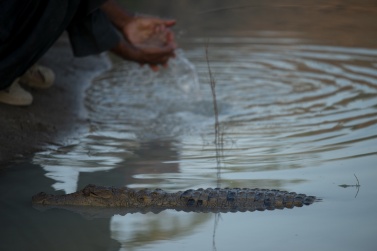 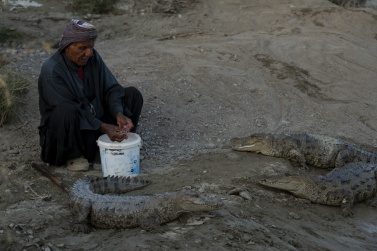 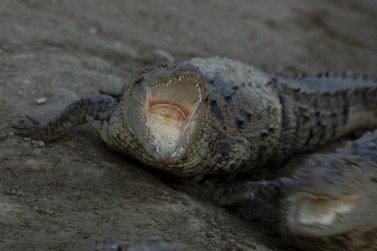 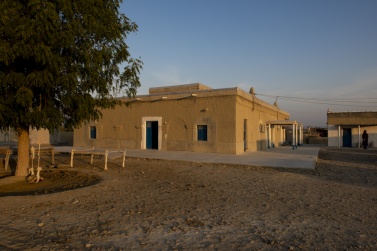 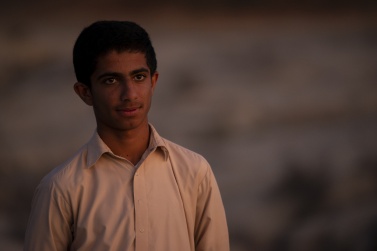 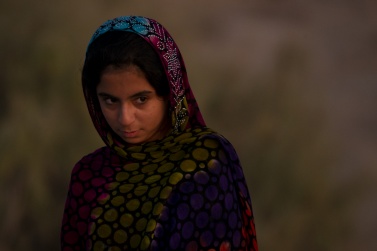 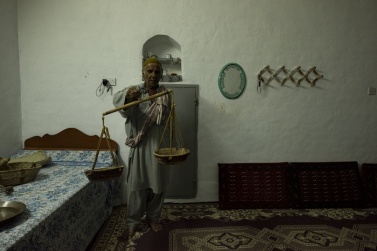 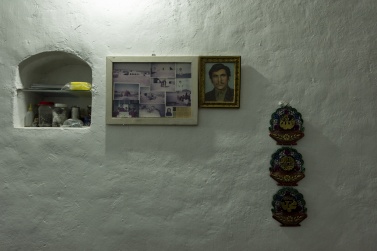 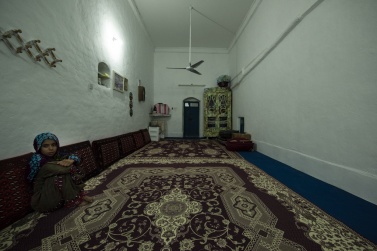 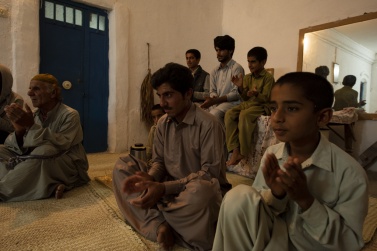